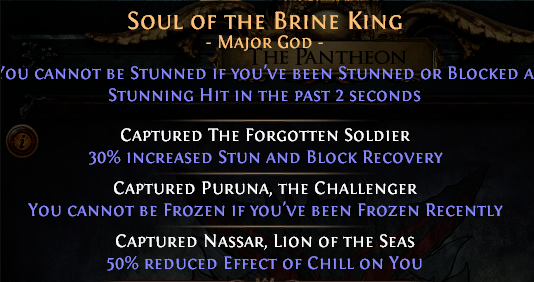 Major God:Stuns can interrupt your Vaal Molten Shell, so you should choose Soul of theBrine Kingto protect yourself against them.

If you have a Watchers Eye, use Vitality/Discipline, otherwise Anger, Grace and Arctic Armour are all great auras to have.

In case you run out of Vaal Souls, you can resort to a 6L Staff with pretty much any spell to back you up. You can also use it in single target encounters to trigger your VMS more often. As a rule of thumb, the more spammy the spell is, the better.

Can get a bit annoying on really terrible maps, but its ok mostly. You usually have a charged VMS ready while the other one is active.

You can check around the forum or usethisguide by Lifting (still works as of 3.3) along with my skill tree.

EDIT: Crap, didnt see that Poachers Mark was by attacks. For some reason, thought it was any hit. Still useful but nowhere near as much.Last edited by DeadlyGrim on Jun 18, 2018 11:04:00 PM

80% chance to Avoid being Stunned if youve Killed Recently

Another option isDivination Distillate, but it felt pretty clunky to me even though it should work on this build.

Mind over Matter can help you mitigate a bit of DoT damage (since the build doesnt use mana), but its not a lot.

This is an import of my character, with only the level and gem level being adjusted

You can pick up Alacrity if you want to.

Use this to move around and buff yourself with Fortify. Ideally you want this in a Vorici-crafted weapon with Blood Magic, to avoid running out of mana during the Soul Catcher flask.

-Not a league starter nor a beginner build

Watchers Eye is by far the best item. Getting two life on hit mods is extremely expensive, although one is already enough.

To sustain VMS we take duration passives on the skill tree and the unique flaskSoul Catcher, along with flask effect passives.>

3 – Added Fire DamageIn order to make any of your abilities able to ignite, you want to add fire damage to spells and attacks.

+Damage grows with monster pack size, with no limit

After all the positive feedback on myMolten Strike Assassinit became very apparent to me that the playerbase has a soft spot for volcanic-themed meme characters that abuse life gain on hit and cause heavy performance issues.

2 – Life RecoveryPick at least one:

You dont want to use these gems in your weapon/shield, as weapon-swapping causes you to deactivate them.

Here is an example of my self-crafted LIDL staff, including hipster gem setup:

What are your thoughts on using something likeGluttony? It gives you life recovery on hit, frenzy charge generation, culling strike, and physical damage taken on movement skill usage. I know the build is moderately unique heavy already but it seems to give lots of relevant stuff.

The rest is done by killing enemies fast enough, but optional you can also use these jewels to help you out:>

-Bad against bosses with a lot of phases, squishy vs single targets

EDIT: Crap, didnt see that Poachers Mark was by attacks. For some reason, thought it was any hit. Still useful but nowhere near as much.Well the thing is, you can always just put a curse in a CWDT setup in this build, so you dont actually need a CoH item for that.

So I made another build – this time not with Molten Strike, but Molten Shell.

Whats especially notable is that you can useShackles of the Wretchedon Jugg to curse yourself with Temporal Chains, which will increase your VMS duration without slowing you.

SpoilerThis Build usesVaal Molten Shellas its main skill, which causes an explosion everytime you mitigate physical damage – with no cooldown.>

Firestorm / Ball Lightning:most hits-per-cast out of any spell, highly recommended

I chose Inquisitor because he grants a ton of damage and mobility (I also had a Templar leveled at that point), but you can play this build on Elementalist, Chieftain, Ascendant or Juggernaut aswell.

Culling Strike:essentially 12.5% more damage if you land a perfect cull

Of course theres a lot more spells you can use, so feel free to experiment!

In general, one of these sources is enough to sustain your life, but having more will also cause you to heal more.

A Silver flask can be a nice replacement, as it grants extra mobility. 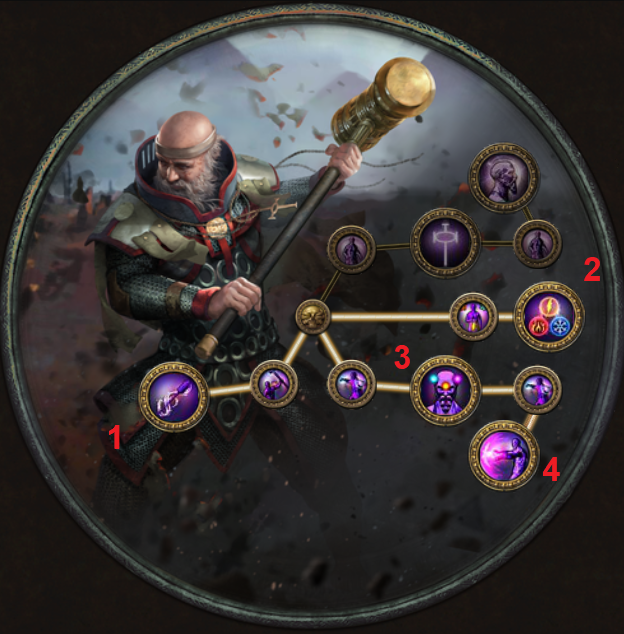 4 – Other GearThe rest of your gear should be filled with rares, but I highly recommend the unique ringMokous Embrace.>

Herald of Ash should always be taken as it increases your damage.

To mitigate the damage dealt by Eye of Innocence – and even heal yourself from it – you can use a couple of items:>

Minor God:Soul ofRyslathahelps improve your life flask. This is important in case you ever get inflicted with a heavy DoT effect.

You can also takeSanctifyinstead of Instruments of Virtue, the Consecrated Ground will proc when you are hit by Eye of Innocence, effectively giving you ~400 life regen.

-Gameplay can be hectic on bad map layouts

This build doesnt use any mana, so you should reserve as much as possible.

Everytime you ignite something, you will take fire and a little bit of physical damage, which will then trigger Vaal Molten Shell and Gems linked to level 1 Cast when Damage Taken, starting a chain reaction of ignites.

Ikilled allfor the two passives points, but helpingAlirafor +20 crit multi and 15% resistances is not a bad choice either.

You want this setup in your helmet, as getting 6 off-colours in The Rat Cage is a huge pain in the ass. If you want a more reliable VMS, you can replace Combustion with Increased Duration.

You can add support gems to this setup by using a Shaped helmet, which will essentially make it as good as a 6-link, while also saving two gem sockets and being cheaper.

It has many useful stats for the build, more more importantly: it will cause Eye of Innocence to inflict you with a very weak ignite. This will allow you to benefit from its damage bonus and fire damage leech.

What are your thoughts on using something likeGluttony? It gives you life recovery on hit, frenzy charge generation, culling strike, and physical damage taken on movement skill usage. I know the build is moderately unique heavy already but it seems to give lots of relevant stuff.

You also want to get enough dex on your gear to be able to wear The Rat Cage.

You only need 1 point of damage, which will then trigger on criticals strikes or from chance to ignite.

I personally leveled with RF, but would recommend either Volatile Dead (Poets Pen), Arc or Blade Vortex because theyre really strong right now.

Anything that can benefit the build, like Shield Charge attack speed or Molten Shell damage.

I dont think theres any movement skill right now that can proc often enough to make the belt worth using just for that.Build Guides:

In the worst case you just swap to the staff.Build Guides:

The gem is often used with the unique item Scolds Bridle, which causes you to take damage everytime you spend mana.

SpoilerYou cant level with VMS at all until you reach maps, but you can play this like any other basic Inquisitor caster until then – the skill tree is pretty much the same on every build (including this one).

+Relatively tanky outside of lag and oneshots

You want pretty muchexactlythese flasks, the only thing that can be exchanged is the Stibnite flask.

The rest of your gems should pretty much all be level 1 CWDT spells that cause as many hits as possible.

-Doesnt work until you reach endgame

This build, however, uses the combination ofEye of InnocenceandThe Rat Cage.