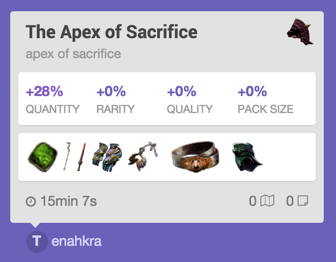 Register onPath of Mapsto get your personal authentication token (you can find it on your settings page).

Most people dont use this command as it just records the map tier, and use the more generic way of recording drops (see previous section).

To do so, hover over the item, then pressctrl + d(or whatever you set in your app settings). The copied item will be sent to and recorded as a drop of the current map.

Use this command when you level up in a map. Its useful to get an idea of how many maps you had to run to get to this point.

Some commands are not supported by the app UI, and you have to type commands in chat to interact with Path of Maps.

The edit command allows you to edit the most recent map thats still opened. It takes the same options as the start command.

Since version 0.1.2, you can record actual item drops, and they will appear on your maps:

When sending thestartcommand without options, the desktop app will look at the content of your clipboard and send it to the server,if it contains map data, and only then.

2.After having started a map, you can record drops (maps, uniques, gems etc).

The timer will only update itself on the site when you pause the map, or close it.

You already could usestart name the apex of sacrificeto track an Atziri run, but its long to type, and youd get the hand iconon your map, which is usually there to indicate a map was started manually.

If you have any questions,contact me onReddit, or head over to theofficial threadon the Path of Exile forums 🙂

Some commands, like editing a map, are not supported in the UI, youll have to enter them in the game chat.

The note commands allows you to add notes to your map, to remember noteworthy events (exa drop, HC death, whatever).

You can shorten the league name and just use the first 3 characters,s craft nem.

The supported leagues can be foundin the Wiki.

Launch Path of Exile and the desktop app, and start tracking your map runs.

To do so, just hover over the item, then pressctrl + d(or whatever you set in your settings). Then item should then appear on the map.

This command is outdated and not recommended.

ripwill increment the rip counter by 1. You would typically enter this command just after your character dies. Thats the only one youll need if youre a HC player…

This command allows you to track The Lords Labyrinth runs.

The Path of Maps desktop app allows you to control when a map starts or ends, to keep track of the valuable drops, etc, just by pressing a few hotkeys.

Adds a league mod to your map, from Zanas crafting bench.

Aborts the most recent map, in case you opened it by mistake, for instance. You can also simply delete it from the website, using theicon in the bottom right hand corner of the map.

Heres what you need to do to get things going. 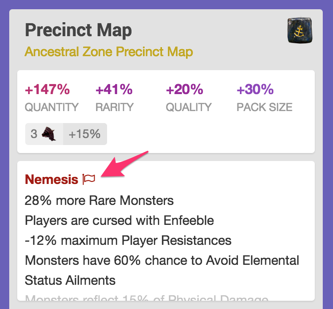 Enter the token in the desktop app, in the settings window.

This command will reopen the last map, if its closed. Useful if you closed it too soon and forgot to add some drops.

Thats the easiest method by far, so use it when possible!

The drop command allows you to record which map dropped during your run. You can list as many levels or tiers as you want in one command.

Note thatuniques should be identified, otherwise it would be hard to determine which unique it is.

You can track the same type of items you would in maps, but you can also trackTreasure keys,Silver/Gold keysandTrinkets(like Cogs of Disruption for instance).

Use this command to indicate how many fragments you placed in the map device, along with your map.

For instance, you can track your Uber lab run with lab uber. For every difficulty, you can also provide just the beginning of the difficulty name. Ex: lab crwould also track your Cruel Lab run just fine.

What about Zana dailies/missions? Those cant be copied. And what if you forgot to copy the map before opening it?

Well, you can start a map manually by providing options to the start command.

Adding a league mod is also supported by thestartandeditcommands.

You can track your runs simply by pressing a few hotkeys.The desktop apps supports starting/ending a map, recording drops, recording a master encounter…

Here are all the available commands:

Get the PoM desktop apponBitbucket, install it and run it.

level(orlvl) andtier(ort) set the item level and map tier respectively. Setting one will set the other automatically.

You can also use thedropcommand without any arguments, but its not recommended.

The main goal of Path of Maps is to let you track your map runs in Path of Exile, and see stats about them.

Click on a command to learn more about it and its options.

I might implement OAuth later on, but for now, this will work. You should not share this token publicly. If it gets compromised, its easy to generate a new token from your settings page.

rip +2will increment the counter by 2.

You can also specify the fragment count in the start or edit command, along with other options.

So, to sum up, roll your map, then copy it by hovering over it in your inventory and pressingctrl + c, and typestartin the chat window.

The ripcommand allows you to track when you die in a map. It can be used in different ways.

You can set up hotkeys in the Settings window to start and end a map, record a drop etc.

There are 4 difficulties in which the lab can be run:normal,cruel,mercilessanduber.

3.Finally, when youre done with your run, end the map withctrl + e, for example.

craft league_nameadds a league mod to your map, from Zanas crafting bench.

The map quantity displayed will include this +15% IIQ bonus.

1.Roll a map, then hover over it and pressctrl + s. This will send a text representation of the map to Path of maps, which will record it and display it in your profile.

The rarity value can be one of the following:normal,magic,rare, andunique.

You can shorten the league name and just use the first 3 characters,craft nem.

Obviously, you can combine all these options, the order doesnt matter:

Track your map runs in Path of Exile, and those of the whole community.

rip 2will set the rip counter to 2, regardless of what it was before. It can be useful if you just want to set it once at the end of a map.

This allows you to pause and resume the timer, if you need to stop for trading, or IRL stuff.

An option takes the following form:option_name option value. Note that the order in which you enter them doesnt matter.