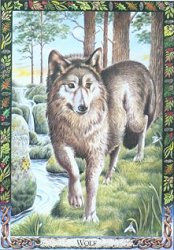 The book, card, and divinatory cloth set are packaged in a cardboard box with a wrap-around sleeve. I find this to be superior to the side-entry boxes, which decks seem to vault from at will. Once the cloth has been unfolded, it is difficult to fit all three components back into the packaging. I keep my book separate, as I have found it a useful reference for writing projects and tealeaf divination.

The Swan is shown opening her wings in preparation for flight, while her mate serenely drifts with the current, waiting to accompany her. The Swan is identified as Yewberry from the Irish story, the Dream of Oenghus, wherein a woman shape shifts into a swan wearing a golden necklace. The image of the Swan adorned with gold feels almost natural. Mirroring the mythologies of each animal with the picture on the card occasionally results in the addition of symbols that seem forced into the setting. As the Bear emerges from her cave, she places one paw on a gilded mace similar to those unearthed by archaeologists near Stonehenge. A crown meant to symbolize the kingship of Arthur lies abandoned in the snow outside her rock-formed den. If I werent aware that bears rarely attack humans without provocation, I would have thought she had just eaten Arthur and looted his royal treasures.

BlackbirdEnchantment, The Gateway, The Inner Call

Although Philip and Stephanie Carr-Gomm include reversed meanings for both the animal and dragon cards, I feel the text is so replete with imagery that the cautionary or challenging aspects are often included in the Druidic mythology and Celtic folklore. An experienced, intuitive reader may not need to utilize the reversed meanings. A student new to divination would be more likely to find the reverse meanings helpful with analysis. Because the cards contain threefold interpretation, I would recommend a thorough exploration of the text before attempting any of the layouts. A table in the back of the book shows interrelating pairs of animals along with shared gifts, qualities and abilities.

The oversize cards measure approximately 4x 6. Although the cards are slightly more challenging to work with than a traditional-sized deck, the enlarged images create a beautiful accompaniment to an altar or meditation space. The Druid Animal Oracle is one of the few decks I use for all areas of my spiritual practice: professional readings, personal readings, and meditation.

The Druid Animal Oracle by Philip and Stephanie Carr-Gomm;Illustrated by Bill Worthington

the backs of the cards. I wish some of the design from the borders showing ancient elemental symbols and the leaves, flowers and berries of Celtic trees would have been expanded upon. There is no dearth of Celtic knotwork to represent the Wheel of Life that could have inspired a beautifully intricate circle that would have made shuffling more pleasurable.

The artist manages to create four distinct dragons that personify each element in nature. The Earth Dragon is a coil of brown scales tucked into a small cave rich with gilt handled swords, gold torcs, and crests. Images of the four dragons are printed in silver in the corners of a blue divination cloth included with the book and card set.

Although personal study in Celtic mythology and animal lore is useful in lending a greater connection with the cards, I feel that Philip and Stephanie Carr-Gomms book is a wonderful initiation to the Druidic path. The 176-page illustrated text contains a brief philosophical explanation of Celtic shamanism, the power of inner animals and totems, a listing of the English and Gaelic names of the Celtic animals and dragons, along with a pronunciation guide and sample readings. The animals are chronicled in order of their appearance in Druidic mythology. Although the placement of the animals in the text provides for a flowing, preliminary read, it creates difficulties in referencing information. An alphabetical index is located on the inside of the back cover. I wish it had been positioned towards the front of the book.

The Druid Animal Oracle by Philip and Stephanie Carr-Gomm is a 33-card non-tarot deck composed of twenty-nine Celtic animals and four elemental dragons to embody the characteristics of water, earth, air and fire. Three blank cards are included so readers can add images of personal totem animals not already represented.

Worthington painted the animals on a larger scale than the background images. This technique reminds me of religious paintings wherein a deity is pictured in a grander size to illustrate the importance placed on his presence. The detail of the Blackbirds glossy feathers leading to his yellow beak gives him a tender expression that may not be considered when viewing a bird among the branches of a rowan tree. Although I have the bee as a totem animal, Worthingtons Bee gave me pause. The alteration of traditional perspective made the Bee larger in scale than the royal court of Tara. Looking into the card made me feel that I was trapped in an early 1960s Sci-Fi movie where giant insects descend from the heavens to reap destruction on planet Earth. I wish he had chosen to paint a bustling hive instead.

The backs of the cards depict three rays and three circles in silver on a dark blue background to convey the light of Awen, or flowing spirit. As the cards are reversible, the image is mirrored to create a picture that I first believed to be a modern interpretation of a sheaf of wheat. The cards are so abundant with symbolism; it is possible to find meanings that are not intended. Worthingtons great skill as a painter was not fully utilized on

I would recommend The Druid Animal Oracle to anyone who is interested in Celtic studies or feels drawn to the totemic power of animals. As respected teachers within the Order of Bards, Ovates, and Druids, Philip and Stephanie Carr-Gomm forged a scholarly, yet accessible, approach to the text. The art of Bill Worthington offers an emotive and inspiring view of animals within nature. More information on both the authors and the artist can be obtainedhere.

The Druid Animal Oracle by Philip and Stephanie Carr-Gomm;

The watercolor paintings by Bill Worthington contain active representations of animals from the Celtic pantheon. The Cat with her arched spine and standing fur seems positioned for defense. With her claws outstretched and her fangs displayed, the resonance of the feline hiss practically sounds from the card. Among her mountain habitat of grey rocks and trees rooted within the sloping landscape, the Cat is depicted aside her native plants: pink flowering cats foot, hill-cats glove and cats tail. Linking each animal to herbal lore is thematic of the deck. Although the plants represented are native to Celtic regions, the inclusion of herbs in relation to their respective animal can provide a deeper understanding of interconnectedness within nature for both novice and experienced herbalists. I do wish the text offered more information on the herbs pictured along with the Latin names.

Valerie Antal is a writer and Tarot Reader living in Philadelphia, Pennsylvania. She offers traditional Tarot readings, Goddess Meditation and Celtic Animal Readings via telephone and in person. She is currently working on a book of meditations to the Goddess based on the Celtic Wheel of the Year. For more information about her Tarot practice, please visither website.

The Cow stands before a placid lake with one hoof raised. It feels as if she is about to step closer. The long coat of the highland cow seems welcoming to touch. A single drop of milk falls from her udder as a characteristic of her nourishing qualities. The book shows the Cow as a patron of the Goddess Brighid, who was fed the nutriment of an Otherworldly cow. A charming Scottish story of fairy cows that dwell beneath the sea exemplifies the dedication of the authors to create a multi-layered text rich in Celtic folk tradition and Druidic mythological history.